Why do thoughts manifest, what is the physics behind it?

The laws of quantum physics are the basis for the law of attraction and responsible for the effect that  thoughts have on reality. According to quantum physics, reality is divided into two areas: unemanifested and manifested.

The manifested reality is the universal field of quantum energy in which all possibilities are joined into one, beyond time and space. It is the finest field of existence, and the finest field of vibration, the whole existence, everything that was, is and will be is in it; the pure energy potential, in the timeless present.

Reality is created when these universal quantum field vibrations become so complex that they can be perceived as  rough reality we observe with our senses, as the physical world in which physical laws and laws of causality govern time and space.

The process of manifesting everything from the finest quantum field or pure energy vibration to a gross physical form, of a thing, a phenomenon or an event takes place through four principles or dimensions. This process is described in detail in my book: The Process of Realization, and here I can briefly outline  that these dimensions are in the esoteric science represented by the elements of Earth, Water, Fire and Air.

They should be conceived in the form of a pyramid with the element of the Air at the top, the Fire below it, then the Water and at the end, while the Earth is at the base of this pyramidal structure of the overall  existence.

The element of Air represents the finest frequencies of events and is the closest to the quantum field of physicists, contracting time and space of the pyramid of events, and therefore it represents the occurrence at the level of information. These are the thoughts in our mind.

The element of Air, therefore, represents thought and information about an event, sheer idea. It is the closest to the quantum field in which space and time are compressed into one. The idea or thought forms the energy of the quantum field, the element of Fire, directs the will towards some action. Information is at the base of every activity which requires energy; energy and information are not different, they work together. When they act together they produce a form; not immediately on the physical plane, but on a plane that is just a bit above the physical reality, in astral. It is the world of dreams and the world of imagination, it is where the final formulation of ideas and energy is formed, before it materializes in the element of Earth, in the physical reality. 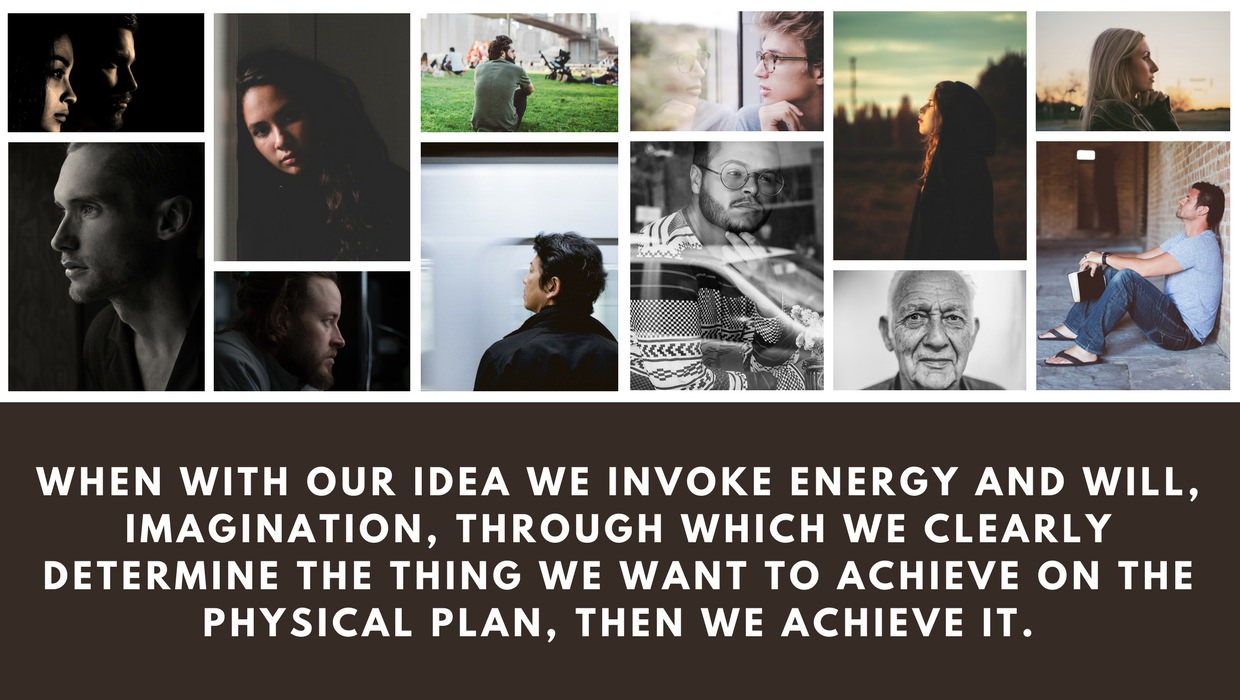 Manifesting your thoughts into reality

These four principles or dimensions always work together: an idea or a thought forms the energy for an action through imagination to later materialize on the physical plane. This is how a thought affects the realization, the reality. All these four principles are in our being, as well as on the outside. In us, this is a thought, a world of ideas, as vibrations that are the finest and the closest to the quantum field, independent of time and space, because using thoughts we can imagine everything; independently of time and space, past, present and future, what is here and what is far and away; with our minds we are able to create the virtual reality, through which we create everything else into existence, we are preparing for understanding and acting in the physical reality.

When with our idea (Air) we invoke energy and will (Power), imagination (Water), through which we clearly determine the thing we want to achieve on the physical plane (Earth), then we achieve it. Because that is how everything is usually achieved in reality, from the unmanifested quantum field it becomes  rough physical reality. But only if we connect all these processes and work equally on them.

If we think on one thing, invest energy on the other, and dream about something completely different, then the result in the physical reality will be something quite different from what we had hoped for.