To understand how the soul works, we first need to be clear that the soul is not something that comes from the body and mind, it is far beyond all that.

The simplest presentation of the organization of our being, which everyone in a personal experience can recognize, is division into the lower and higher mind, as well as the consciousness of the soul.

The basic structure of the divine consciousness that enables everything in a human being is:

The higher mind affects the lower mind by giving it a higher and broader perspective, it sees every event from a larger dimension, in a wider context, regardless of time and space, and therefore can provide information to a lower, physical mind or Ego with a very limited perspective, It sees only what it sees with its senses.

This information from the higher mind to the physical mind arrives as an inspiration or intuition, a sudden insight, in reality, but also through dreams, when the physical mind is suppressed and the higher mind can act on a human being more easily. This information can also be independent of time and space, and therefore it may appear as clairvoyance.

All the religious and mystical experiences of mankind reflect the connection of the physical or empirical mind with the consciousness of the soul through the higher mind. Sometimes this connection is misrepresented as “conversations with God” or with “guardian angel”.

In short, all the objective knowledge that a person has in this world comes from it, from a higher mind that forwards the consciousness of the soul into the body and lower mind. All the discipline and culture of man in this world is to train the lower mind to be open and suitable for the insights that come from the higher mind. Although it must be said that there are cultures that do the exact opposite by preventing connection with the higher consciousness.

The signals that the higher mind sends to the lower mind have different shapes and strengths. They can be sent in reality and in dreams. They may be weak and vague sensations of presage, intuition; they may be sent to the physical mind in the form images and visions in the imagination; messages can be forwarded through an intermediary, or through the action of another person, who is often unaware of his intermediary role; however, when the animals are the mediators, they are perfectly aware of their role; through a written or spoken word that we hear or read at the right time anywhere, on the billboard, or in the Bible; at that moment, we are most probably witnessing the work of amazing synchronicity in the events.

In fact, synchronicity is a very common method of sending messages from the higher mind and soul to our limited physical mind. Certainly, if the higher consciousness estimates that the physical mind is capable of recognizing and understanding the synchronicity, instead it may end up interpreting it as a coincidence and experiencing everything as some innocent surprise.

In the end, the consciousness of the soul can, in rare cases, when the life of the physical body is compromised, or if the predicted path of life development is endangered, act in a harsh way; it can speak out clearly and loudly and let us know in words, what the mind needs to know. It will hear it as a clear voice, in the head, by the side of the ear, or outside of oneself at a short distance.

If necessary, the higher consciousness will also act on the body with physical force: if a person with a limited physical mind starts moving in the wrong direction that will endanger him/her, and if the soul estimates that neither intuition nor inspiration will help, and the voices will be misinterpreted, as well as if there’s no mediator to help, the soul will cause some physical effect to prevent the body from going in the wrong direction, maybe it will make it stumble while walking and thus suffer a slight injury, or it will simply push it back as a kind of invisible force – that happened to one of my friends, otherwise a good soul. Scared, she came back and avoided bad consequences.

These interventions can also go as far as teleportation. This happened to Helena Petrovna Blavatsky, a great soul who carried an important information from the higher spheres to this world,  the founder of the Theosophical Society, when at a violent street demonstrations her was life threatened; she was suddenly teleported to a quiet, side street. Indeed, the consciousness of the soul can act as an unexpected force that suddenly arises and solves the matter.

The closer we get to the soul’s conscience, it becomes clearer to us that we do not live in a material world where events occur only mechanically or by chance. Of course, a good percentage of events is such, because it is so necessary for the life of the nature, but it becomes more and more clear to us that the divine consciousness of the soul can always act and manage everything, humans, animals and events, to synchronize them as needed in a unique drama in which the divine consciousness is the director, screenwriter, an extra, and even the entire theater, if needed.

The more we are alienated from our soul and identified with the mind, the more the world feels alien to us, the events are mechanical and random, contrary to our being and life, we are that much more in conflict with nature and other people, as well as with ourselves. 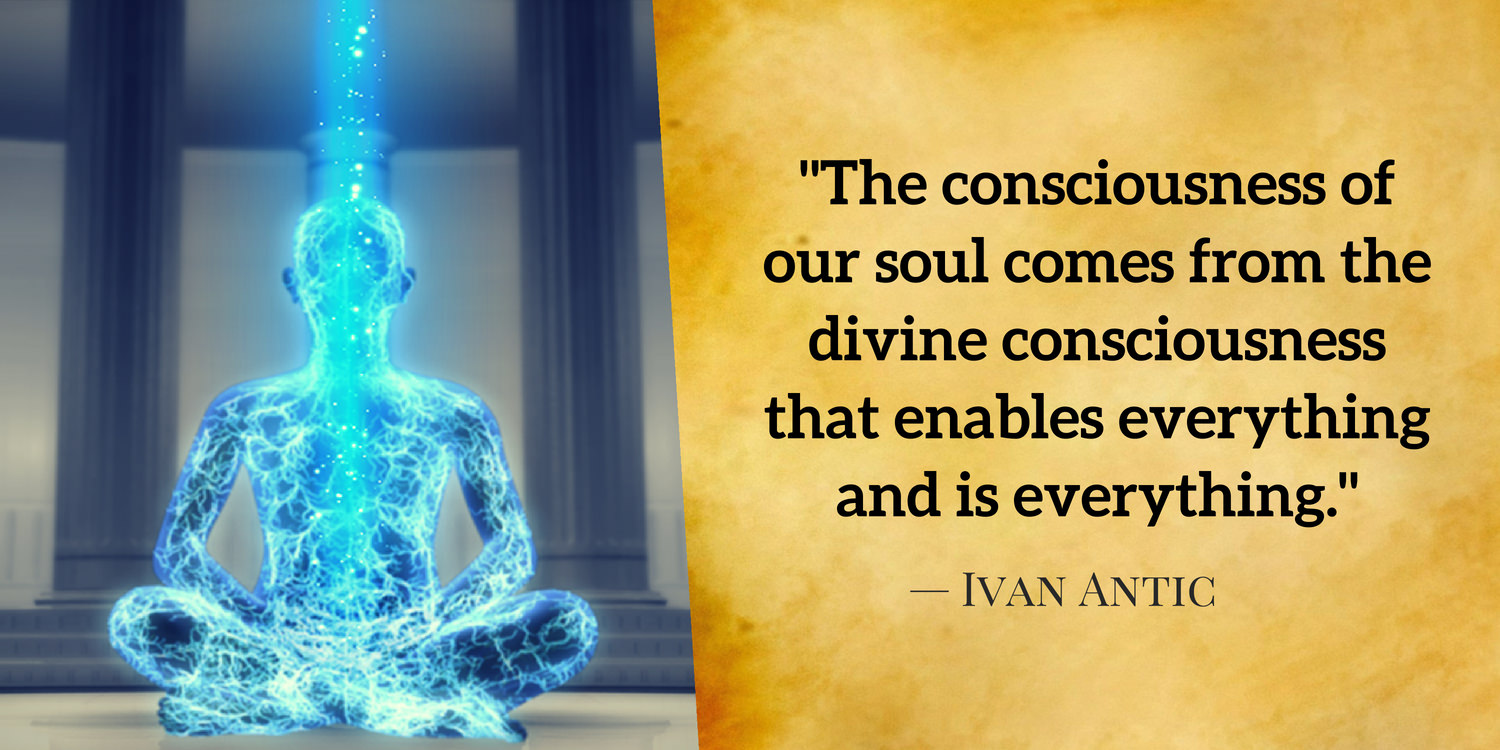 When we turn to ourselves, to the consciousness of our soul, to the divine consciousness, then it turns to us as well. This happens in parallel, as if in a mirror.

The whole existence reveals itself to us as a living and omnipresent force, as unconditional love. When a person reckons based merely on the lower mind and the ego, he/she in such a case always reckons on the basis of force and interest, because at the base of his/her reasoning is a tendency to preserve the ego, to defend themselves from the unknown; as well as the essential ignorance and distrust towards the power of the higher force, and the consciousness of the soul. He/she lives in fear for their survival, which they see only in matter, and all their actions are based on this existential fear. These are the people who do not believe in soul, in the afterlife or in God. They are reckless fighters for their own interests and do not know about forgiveness and mercy. They always trade with everything they have and do, even with feelings, they always count what they will get out of something or someone. These people are the ones who are capable of committing physical violence.

All grace and kindness come to this world from the consciousness of the soul,  peace and tranquility bring awareness that the body is not everything that exists, that life and existence are far more than the body and the current contents of the mind, that everything is connected through a higher, common factor.

The presence of love, peace and complete forgiveness is a compass that indisputably points to the presence of the soul consciousness, or to its absence, when only the physical mind and the ego reckon through rudeness and violence, or calculated trade.

The spirituality that is enabled by the consciousness of the soul which goes beyond the mind is the source of the humor as well. The sense of humor in all circumstances, even the hardest ones for man, is a reflection of the soul consciousness, which is always above all the events and conditions of the mind and body.

A sense of humor is otherwise the ability to unite what is unconsolidable to the conditioned mind, the ability to see things and events from a higher perspective and dimension, regardless of time and space, humor plays with every illusion the mind is limited by. That is why the truly spiritual people are known  for being witty at the same time. Spirituality without a sense of humor is just a deadness of the mind. Soulless people have no sense of humor. 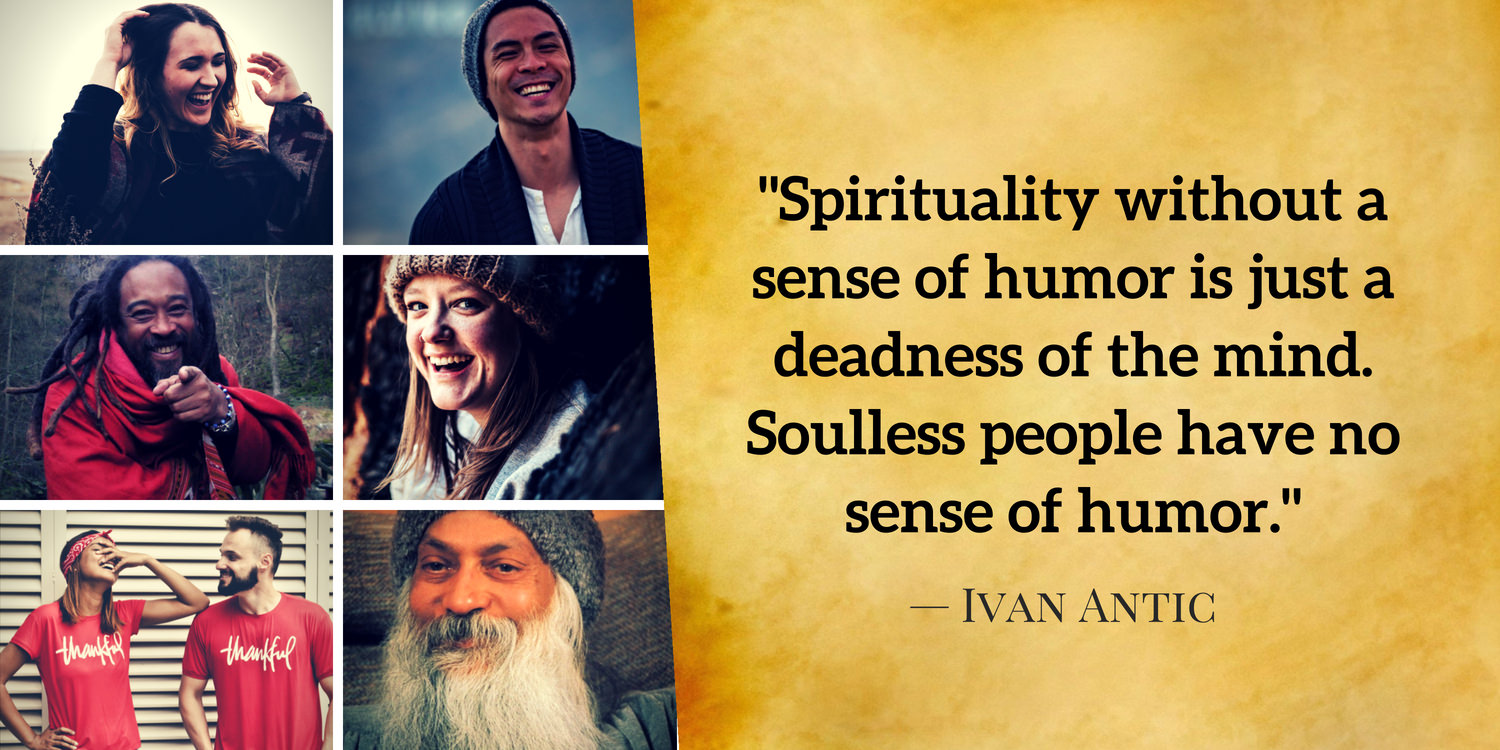 An ostensible separation from the divine source also creates a genuine urge to unite with it; it creates all the creative potential of the consciousness in man, to return to the original state of the divine soul; to understand reality.

Due to this seeming separation from the soul, everyone seeks refuge in all possible ways, in all forms, in creating better circumstances, in creativity that improves things; that is how civilizations and cultures are created; in relationships with other people, we always seek the perfection of the understanding of the soul – conflicts and misunderstandings are only a part of this complex process.

This aspiration toward unity with the divine source is the true basis of love and every form of creativity. It is the driving force of every civilization and culture. This is the essential aspiration of all our incarnations. The essence of this tendency is to connect the mind which is in the physical body with the higher mind and with the consciousness of the soul, and through it with the divine source of everything. That’s what all the people actually do throughout all their lives, during all their incarnations.

Only in connection with the consciousness of the soul, people have real freedom, understanding and refuge in this world.

Such a connection of the mind with the consciousness of the soul is directly achieved through meditation. Meditation has always existed so that people would have a direct connection with the soul. All lives are dedicated to it, but without meditation this connection is obtained in a much longer and harder way.

This is how the soul expresses its power in this world.